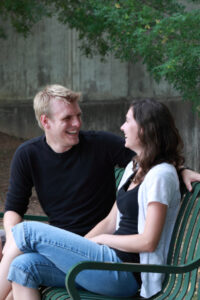 These days 1 in 4 relationships begin online. There’s nothing wrong with Internet dating if you do it right but it’s important to understand a few things when it’s time to meet. First off, safety is everything. Whether you’re a man or a woman, it’s important to always meet a new love interest in a public place. Meeting offline can be intimidating at first. Will you like her? Is he everything he claims to be? Let’s look at the dos and don’ts of online dating and meeting in person.

One of the pitfalls of computer dating is being too shy to meet in person or putting it off. It’s easy to romanticize a person you’ve just met with your own expectations but can your love interest really live up to them? Also, meeting offline sooner rather than later lets you know if this is a single, available person you really want to get to know or if they have something to hide. Too many excuses not to meet in person, especially if you live only a town or two away, should be an instant red flag.

If you’ve been talking online and on the phone for a while, again, it’s easy to have too many expectations. Their photograph is beautiful and their speaking voice is so sexy but good lighting and well-thought-out answers can make a person look more together and “perfect” for you than they actually are. When you meet in person, lower your expectations. If he or she isn’t the god or goddess-like creature you envisioned, don’t be too disappointed. You’re online to meet other human beings after all.

One of the best tricks to keeping things light when meeting offline is not calling it a date. This is a new friend you’ve met and “meeting up” or “going for coffee” puts less pressure on both parties and lowers expectations. You just want to meet and get to know one another so keep it casual and relaxed.

No matter if you’re a man or a woman, it’s important to always play it safe when meeting a potential love interest offline. This means telling at least two friends where you’re going and who you’re meeting as well as always meeting in a public place. Guys, don’t think you’re immune to a negative online experience. Just because you’re bigger and stronger, doesn’t mean she can’t go all “Play Misty for Me” at the drop of a hat. Always exercise caution.

Sometimes dates just don’t go the way you planned. (She’s 50 pounds heavier than she said she was and walks with a limp. He’s been talking about his mother and train collection for an hour straight.) Have an exit strategy. This means making an “appointment” for two hours after the date so you can cut it short and have an excuse to leave. Remember, there’s always next time. If things go well, leaving early can make your love interest eager for more!

Mistakes to Avoid in Computer Dating

One of the biggest mistakes people making in online dating is communicating too much emotion too fast. You tell the person how much you like them, love them, and want to be with them. This is especially problematic if you live states and not just towns away. Sometimes it’s the real thing, but more often than not, it’s just an infatuation. Meet first. Plan the wedding second.

Another big mistake people make with computer dating is lying or embellishing. Don’t put up a photo of you from 10 years ago if you’ve changed so drastically your date won’t even recognize you. Also, don’t lie on your profile or you’ll never attract the right type of person for you. If you’re a quirky bohemian type who works from home, say that. Bragging about your non-existent six-figure income or former modeling career will not win you any points with a potential mate.

Online dating can be a lot of fun. It’s a great way to meet new people and it’s an ideal place for shy ladies and shy men to make a connection before meeting in person. Just remember to play it safe and take it slow. The rest is up to you!

How about you? What are some of your online dating stories? Share in the comments below!

← Prev: Sexual Enhancement Products for Women Next: Don't Be "That Guy" at the Gym - Funny Video →