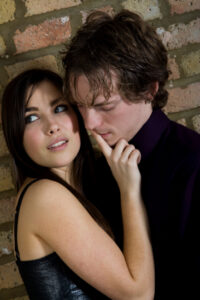 Scientists are beginning to take a serious look at how human body odor influences sexual attraction. This magic scent is not some romantic potion but the aromatic outflow of the immune system. Most people don’t recognize how important human scent is in attracting the opposite sex.  These human scents are called pheromones which are chemical substances secreted by an individual which can influence the behavior of others and often function as an attractant of the opposite sex.

THE DEFINITION OF PHEROMONES

The word “pheromone” was created in 1959 from the ancient Greek “pherein” (to carry) + “-mone” (as in hormone). Pheromones are chemical substances secreted by an individual that produces a change in the sexual or social behavior of another individual.

The body produces theses natural chemical scents or pheromones in order to communicate with others nearby. They are well recognized in the animal kingdom as the force that controls most social behavior, including mating. In recent years scientists have found that human behavior is also heavily influenced by these invisible airborne chemicals.

WHY DO WE NEED TO USE HUMAN PHEROMONES?

Although we each secrete human pheromones naturally they can be washed away through good hygiene and modern day cultural habits.  We take showers daily; apply deodorants, aftershaves, colognes, perfumes, and lotions which all tend to cover our real body chemistry.  The way we dress, especially in colder climates, also influences the ability of our skin to discharge pheromones into the air.

The cover story of the January 28th, 2008 Time Magazine Issue is titled “The Science of Romance” and explains in great detail the importance of human scent in influencing the sexual or social behavior of others around you.

There is a growing body of knowledge supported by recent research findings indicating that pheromones do work!  Not only scientists but practically everyone else wants to know what makes us get so crazy over love and what attracts one person to another.  Some scientists hypothesize that smell may play an even greater role in determining who we are attracted to than physical appearance.

“Scientists have long known that odors and subliminal scents – or pheromones – influence how animals develop, mate, bond, and nurture their offspring. It has come to be known that humans are no exception. Odors can accelerate puberty, control women’s menstrual cycles, and even influence sexual orientation. They help us tell lovers and family members from strangers and let mothers and infants bond. Odors affect how often we have sex, and with whom. They influence how the brain develops, what we remember, and how we learn.” (James Kohl – Researcher)

← Prev: What Are The Signs Of Physical Attraction? Next: What Is The Science Of Romance? →

What Are The Signs Of Physical Attraction?

DO PHEROMONES WORK? The cover story of the January 28th, 2008 Time Magazine Issue is titled "The Science of Romance" and explains in great detail the importance of human scent in influencing the sexual or social behavior of others around you. There is a growing body...